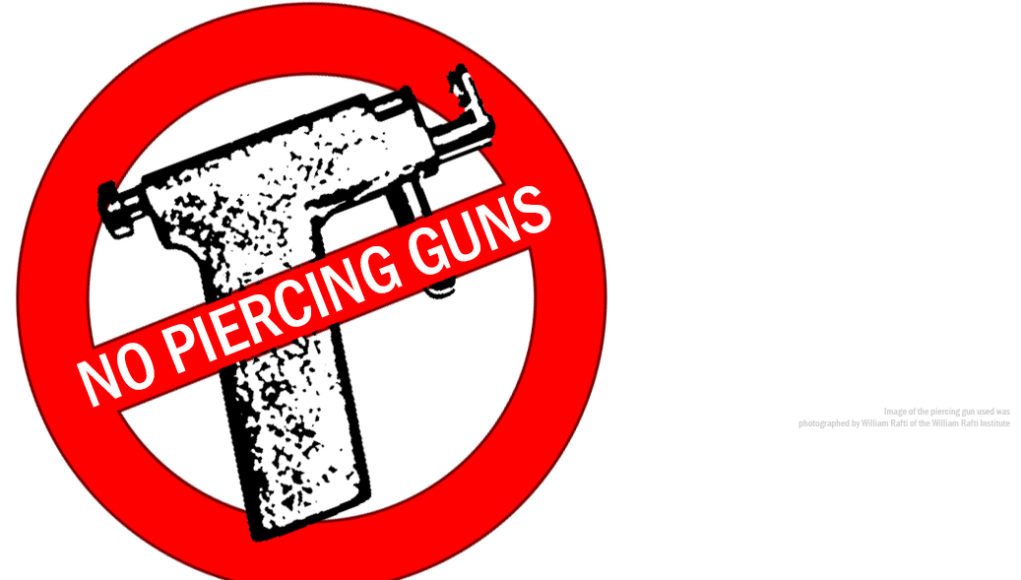 There are good reasons the “piercing gun” is never found in the hands of an industry professional. A hypodermic needle might seem scary next to a hand-held hole-punch, but it has important qualities that the gun does not. Namely, the needle is sharp, surgical, and sterile.

There are several myths surrounding the piercing gun, and I’m here to debunk them.

Myth: The Gun Is Quick & Painless

The piercing gun is no faster than a needle in the hands of a professional. The sharp edge of a hypodermic needle passes through the tissue with less resistance, which means less trauma and less pain. The gun instead uses tension to fire the blunt end of a labret earring through the ear at the pull of a trigger. It’s a glorified hole-punch.

The gun is neither quick, nor painless, and actually makes healing a longer process due to unnecessary excess trauma to the tissue. There is also a higher chance of scarring because the earrings are usually not made of 316LVM surgical steel or titanium, which creates a high likelihood of irritation, allergic reaction and rejection.

Myth: New Models of the Guns Are Safe

Though there are new, modern guns that claim every part of the apparatus that comes into contact with blood and tissue is disposable, I still maintain that if you cannot scrub and autoclave every part that is not disposed of, it is not safe to use.

After the trigger is pulled, the gun sends the earring through the tissue, and then retracts, pulling biological material back inside of it. Without proper sterilization, that microscopic material allows the pathogens to thrive until they are pushed into the next client.

In a professional shop, needles are disposed of in a sharps container as bio-hazardous waste along with any gauze, swabs or pads, and all metal materials (forceps, receiving tubes, pliers, etc.) are sterilized, removing the possibility of transmission. Since guns cannot be sterilized, that possibility is not eliminated. Just because you can’t see the blood doesn’t mean the pathogens are not there. I’ll go into this in more detail later, because it is extremely important.

Myth: Piercers Who Use Guns Are Trained Just Like Other Industry Professionals

In my experience, I have never met a piercer with knowledge of BBPs, proper sterilization procedure, a concept of dirty-neutral-clean—or more experience than two weeks of practicing on a teddy bear in a mall store that sells junk jewelry—that uses a piercing gun. That may sound harsh, but it has to be said. If someone can prove me wrong, I’m more than happy to learn about a sterile piercing gun that uses a sharp point to pierce with. As of yet I’m unconvinced, and I’m not going to avoid hurting someone’s feelings if it means doing a disservice to the safety and awareness of others.

Gun users do not understand that there is a major difference between clean, disinfected, and sterilized. This creates a high risk of cross-contamination.

Cross-contamination occurs when surgical tools and other materials come into contact with bio-material (blood, skin cells, etc.) and are not sterilized before they are used on another person. This can transmit blood-borne pathogens (BBPs), including but not limited to Human Immunodeficiency Virus (HIV), Hepatitis B (HBV) and Hepatitis C (HCV).

The structure of piercing guns is generally made of plastic, which cannot be sterilized in an autoclave. Even if wiped down with CaviCide—an intermediate, surface-level disinfectant that is highly effective against most bacteria and often used to clean piercing chairs and trays—there is no way to ensure 100% sterilization without the high pressure and temperature provided by the autoclave.

If You’re a Gun-User, I’m Not Here to Shame You

It is important to mention that I am not faulting the people who use guns for being unaware, because misconceptions about the industry are common and widespread. This is partially due to the fact that health board policies are lax, and there is no licensing requirement for piercers or tattoo artists in North America. This is the fault of the powers that be, not the workers that are trying to break into the industry without proper access to this very specific kind of knowledge.

That being said, I encourage anyone who is currently working with a piercing gun to seek out an industry professional with the time and resources to apprentice you. Even if the first person you ask doesn’t take apprentices at the time, they should be able to point you in the direction of someone who will. This will require a lot of time and research, but it will be well worth it if you’re serious about becoming a piercer.

Not sure how to spot an industry professional? Check out last week’s post, where I go over some red flags that signal a fake piercer!