All About Body Jewelry (P I): The Basics

Body jewelry comes in many shapes and sizes. Some placements require specific types, and others can be worn with a wide variety—it all depends on the piercing. Let’s start with the basics. 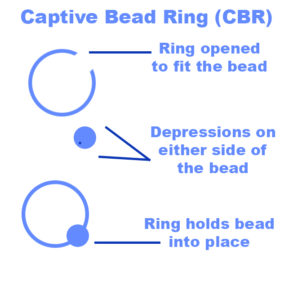 Probably the most common ring used by piercers. The jewelry cannot be taken out without proper tools; therefore, it ensures that the client does not change their jewelry before the piercing heals.

It consists of two pieces—a bead with two small impressions on either side, and the ring that fits into those indents. Tension holds the ball in place. To place the bead, the piercer opens the ring with a special set of pliers, just wide enough to slip the ball in, and then releases the ring around the ball. 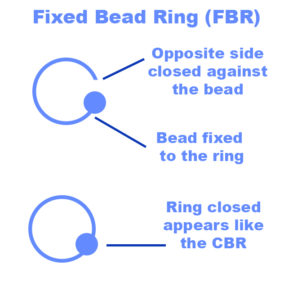 These are similar to the CBR, except that the bead is attached to one end of the ring. The ball is joined to one side, and a small hole is drilled into the opposite end, big enough to fit the open end of the ring inside. Tension keeps the ring closed, and pliers are still required to place and remove this piece of jewelry. 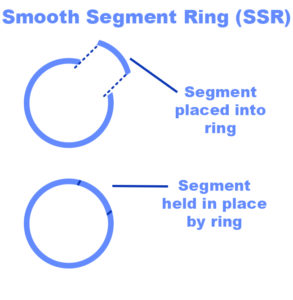 The difference between the SSR and the CBR is the centerpiece. Rather than a bead, a curved piece of the bar fits into the circular shape, giving the appearance of an uninterrupted ring. Also, the center piece of SSRs does not have indentations. Instead, either side of the middle segment has a small lip that fits into indents in the ring. 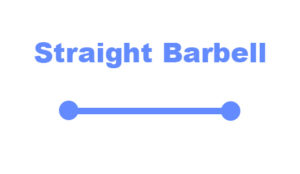 Barbells are different from rings because they have two beads, and they are both easily removed. They also come in several shapes, each of which is used for specific piercings. 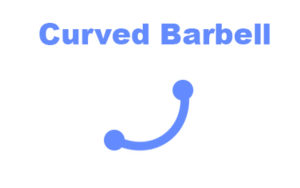 The curvature of the bar allows for more comfortable placement of jewelry in areas where a straight barbell would increase chances of irritation and possible rejection if the bar is positioned too tightly against the skin. They are used for eyebrow, vertical labret, jestrum, and certain ear piercings.

Surprise! Barbells can be rings as well. The circular barbell is shaped similar to the CBR, but with two beads screwed into the ends. These are a popular alternative to rings because the wearer can easily remove their jewelry without their piercer. However, because both sides screw on and off, it is much more likely that the wearer will lose their beads.

Commonly known as the “stud,” this jewelry’s actual name is the labret. It’s a straight barbell with a flat back on one side, and a bead on the other. Typically, these are only found in ear cartilage (helix or tragus, for example), lip, or cheek piercings—placements that require the flat back for comfort.

Nostril jewelry comes in many variants, but usually the top is the same. The end of nostril jewelry is where the difference lies.

The corkscrew end is the most popular, as it is the least likely to fall out. The L end is a simple 90-degree bend. Both the bone and fishtail ends have no bend at all. Instead, the bone end has a small bead meant to stop the jewelry from sliding out easily. The fishtail end is straight and uninterrupted.

Septum jewelry also has several variants, the most common being CBRs and circular barbells. A staple shaped bar of metal called a septum retainer is specifically designed to be comfortably flipped up into the nostrils, hiding the piercing without removing the jewelry. In contrast, the septum clicker, which typically draws attention to the piercing, appearing as interesting shapes embedded with sparkling gems. They can be understated too—a simple D shaped bar where the flat end “clicks” into place is still a septum clicker. 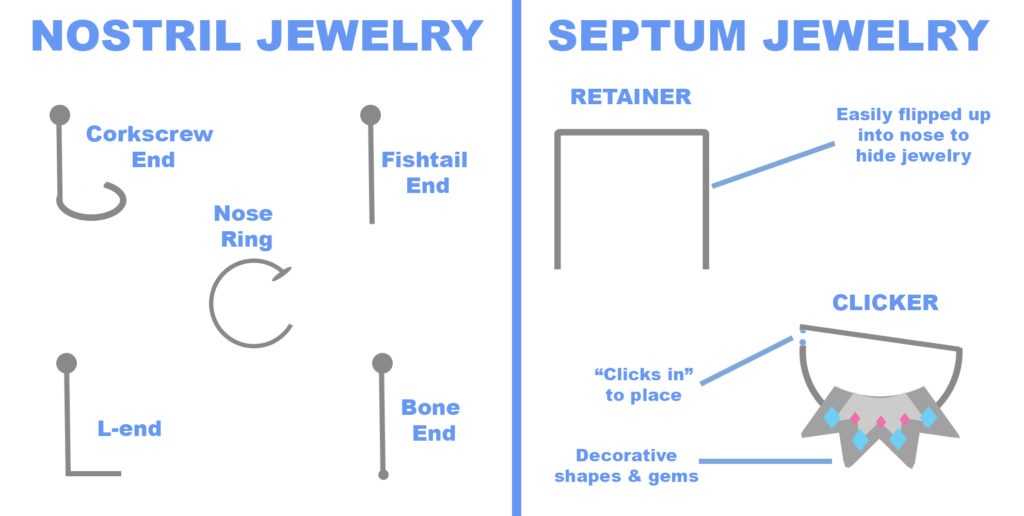 No doubt you’ve seen one before. This particular piece of jewelry is made specifically for belly buttons. It’s just a curved barbell with a smaller bead on top, and a larger one on the bottom. Of course, it comes in many different styles—charms dangling from the bottom, or custom shaped bottoms instead of beads—and easily have the widest variety of options. 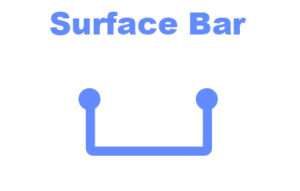 This jewelry is made specifically for surface piercings—a placement where the bar is placed beneath a portion of skin, rather than being threaded through tissue so that it comes out on the opposite side. The bar is formed into a wide u-shape so that the beads rest on top of the skin, not against it. 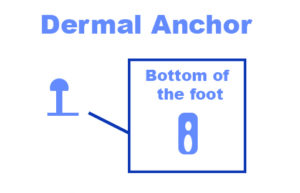 The most common microdermal jewelry is a t-shaped bar called the “foot.” One side is slightly longer than the other so that it can be slipped under the skin and pulled, to allow the smaller piece to be popped under the skin while it’s stretched. On top, a bead is placed against the skin.

That’s all for this week!

Stay tuned for more information about body jewelry in next week’s post!