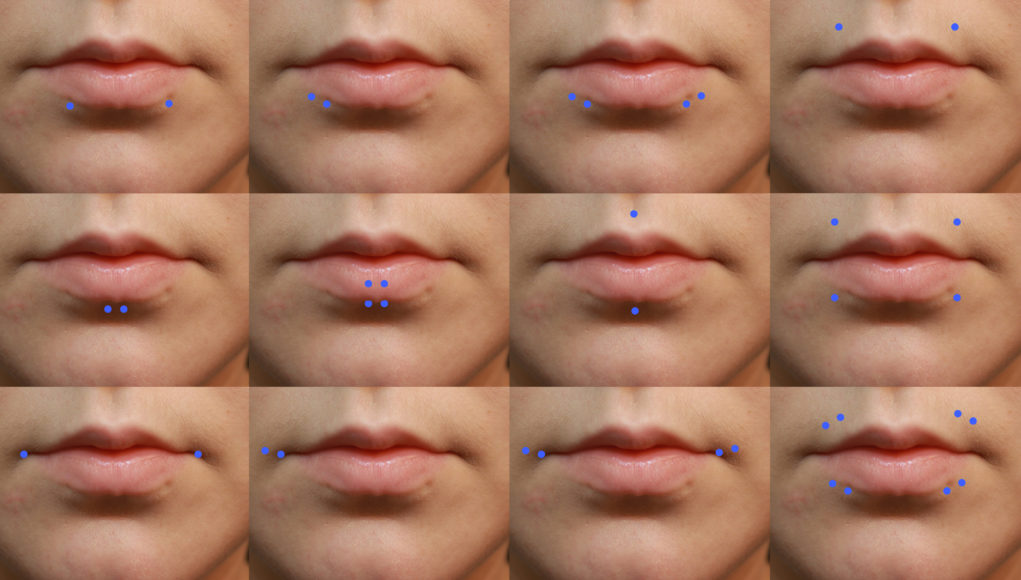 Continuing last week’s post, here are the various ways that you can arrange your lip piercings into “bites.” 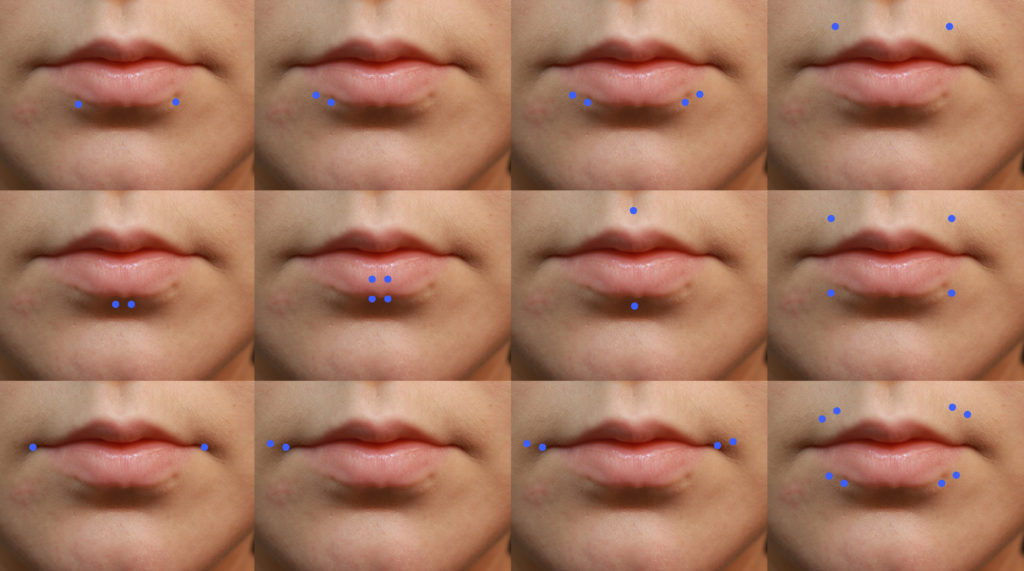 Simply put, bites are just combinations of individual piercings. They are not exclusive to the lip/mouth area (for example, dragon bites = two nose piercings). As for where the term comes from, your guess is as good as mine.

Classic. These were immensely popular with the trends of alternative culture in the early 2000’s. Snake Bites are piercings in the left and right side-lip placements. They can be decorated with a wide range of jewelry types. Captive bead rings, circular barbells or labret studs can be worn in this versatile placement, and gemmed, spiked, colourful or plain steel beads all look great here.

Really, these are just a variation of Snake Bites, the difference being that Spider Bites are placed on the same side of the lip. When the holes are spaced further apart, this placement is referred to as Viper Bites. Either way, they are equally flexible when it comes to your individual style. You can wear the same variety of jewelry as any other Side Lip piercing.

This combination is dual piercings on both the left and the right lower Side Lip—or four piercings total. Basically, they’re just twin Spider Bites. Again, adaptable in terms of style.

Depending on which placement you choose, Dolphin Bites can be two traditional Labret piercings side by side, or two Vertical Labret piercings instead. Arguably, you could also have two Ashley piercings, which would be easily mistaken for a Horizontal Labret. While technically rings can be used in the traditional-style Dolphin Bites, typically labret jewelry is worn. However, for the vertical variant—and for the double Ashley—a curved barbell is required.

Specific to the Monroe piercing, because there is no popularized name for the double Medusa—though I often call them Gorgon Bites, because that seems the obvious choice.

Similar to the Snake Bite, this combination is made up of upper lip piercings on either side—in other words, the Munroe and Madonna piercings.

Technically, the possibility of a double Munroe/Madonna on the same side of the upper lip—like Spider Bites—has not been named, but I like to refer to those as Diva Bites.

Ah, again we come to the strange and rare Dahlia piercing.

As simple as its name, this piercing is a Dahlia placed in both corners of the mouth. Dahlia Bites are much more common than the individual piercing.

For more information on the Dahlia piercing, check out last week’s post.

Named after the character from the 2008 film The Dark Knight, as portrayed by Heath Ledger. The special effects makeup included a “Glasgow smile”—a scar made from an incision that starts at the corner of the mouth and curves upwards into the cheek on both sides. I won’t go into the gory details here, but the Dahlia piercing becomes Joker Bites because of an obvious association with the Black Dahlia murders.

There are two ways to achieve Joker Bites, depending on whether you want two piercings, or four. Two holes are made on either the left or the right, or on both sides.

The final three are bites that combine both upper and lower placements to create unique groupings of lip piercings.

A pairing of the Medusa piercing and the traditional Labret, this piercing goes by a name I can’t explain. Sounds like science-fiction, though. So, that’s cool. There is no name for a coupling of Jestrum and Vertical Labret.

By combining Snake Bites and Angel Bites, you create Canine Bites. I know what you’re thinking, how does angel + snake = dog? Actually, the name is most likely referencing the teeth the piercings are positioned over. Each piercing rests relatively close to the cuspids, otherwise known as canines.

By doubling up on Canine Bites, you achieve the T-Rex Bites. This placement is eight separate piercings. I have no idea where the name for this one comes from, but who cares? It’s the name of a big, scary dinosaur, and that’s enough for me.

There are endless combinations, some unnamed, to my knowledge. Got an addition to the list? Leave a comment below and let us know of new and interesting ways to pierce your lip!