12+ Places To Have Your Face Pierced

The eyebrow piercing is one of the more common facial piercings. Using a curved needle, the eyebrow is pierced vertically along the outer edge of the brow line. A curved barbell is threaded through so that one bead appears above the eyebrow, and the other rests below it.

Although it is called the anti-eyebrow piercing, this placement is actually not near the brow line at all. Instead, it rests below the eye and above the cheekbone. As you can see, it mirrors the horizontal eyebrow piercing. 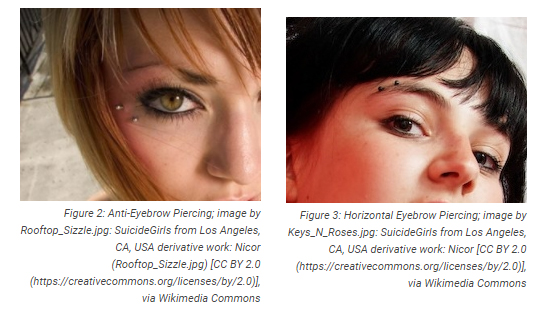 Simply put, this is a variant of the eyebrow piercing, where the barbell rests horizontally above or below the eyebrow, rather than through it vertically.

It is common for the eyebrow to be pierced multiple times, with barbells set beside one another. However, an single eyebrow piercing on both brows is rare. The inner eyebrow is seen even more infrequently, but does exist as a placement—as does the center brow.

The “bone end” resembles a barbell, with a smaller bead opposite to the larger one that sits atop the nostril. Lastly, the “fishtail end” is simply a straight piece of metal with the bead on top—and is not likely to stay in for long. Rings can also be worn, and they are usually quite thin (18g).

This piercing is named after the piece of cartilage it is set against. Interestingly, the hard tissue is not actually pierced. Instead, the small, thin piece of skin that attaches the septum to the rest of the nose cartilage is the space where the needle punctures. This way, it is less painful and easier to heal.

Rings can be worn, or specialized jewelry called “septum retainers” or “clickers” are also options. The retainer is a staple-shaped bar without beads, easily flipped up into the nose if the wearer desires to hide their piercing.

A clicker is a much more decorative piece of jewelry in the shape of a D. The flat back clicks into place inside the nose, and the outside half-circle is usually large and covered in sparkly gems.

Like the septum, the bridge piercing is also named after the area it rests against. Usually, A straight barbell is used, positioned between the eyes on the bridge of the nose so that the beads appear on either side. Also similar to the septum, it is extremely important to take the time to achieve symmetry with this piercing because a lopsided bridge piercing will be very obvious.

Also called the Dimple Piercing, this placement usually comes as a pair, rather than singular. They are placed where the dimples in the cheek would naturally occur and require labret jewelry with particularly long stems to fit through the thick wall of tissue.

The tongue can be an extremely dangerous piercing if done incorrectly, or not properly cared for. There are arteries in the tongue, which are situated in both sides of the muscle tissue. Therefore the piercing is placed directly in the center of the tongue—also because the muscle is held together by a thin piece of tissue in the center that is much less painful to puncture. Improper aftercare can result in infection, which can become very serious if medical attention is not sought out immediately. 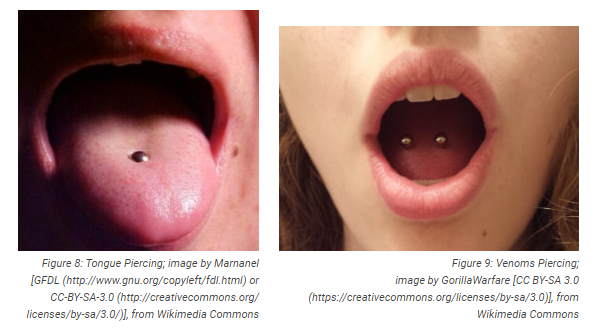 When the tongue is pierced twice, the coupling is called venoms. They are even more dangerous, because they are not centered in the fine membrane, and must be carefully placed around the arteries in the tongue. Of course, always make sure your piercer is a professional, but especially if you are considering a tongue piercing.

This piercing is placed beneath the tongue, through the webbing that attaches it to the bottom of the mouth. It is more commonly known as the web piercing.

Much like the Frenulum, this piercing is placed through the webbing that attaches the top lip to the gum line. Usually a curved or circular barbell is worn.

A mere mirror of the smiley piercing, this placement is through the webbing of the bottom lip. 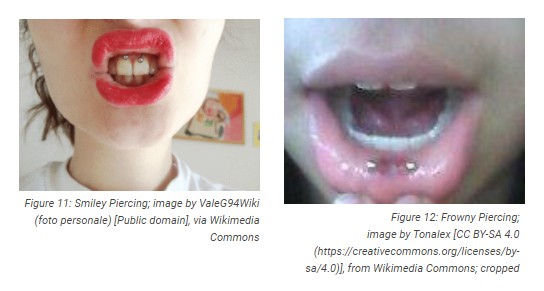